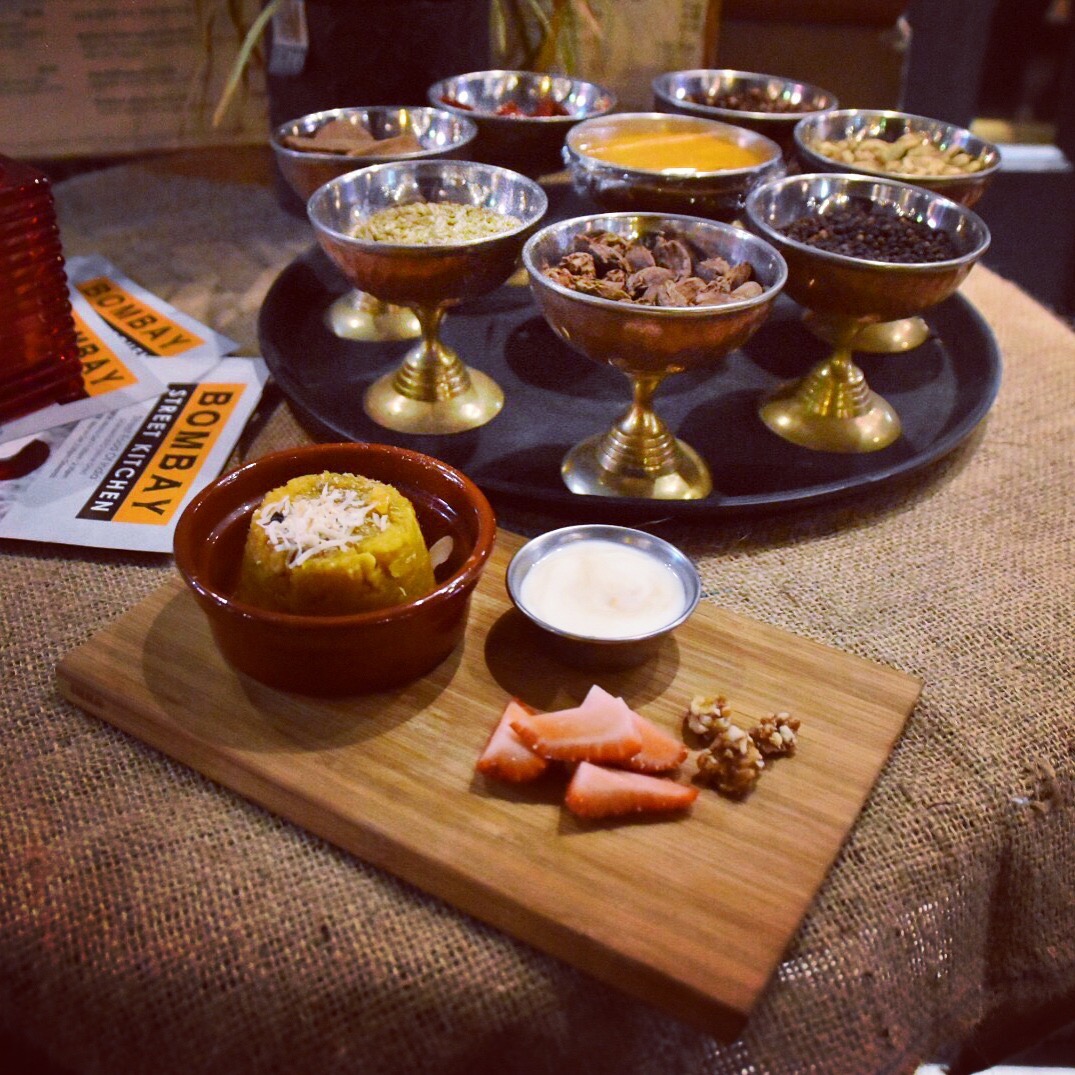 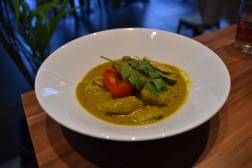 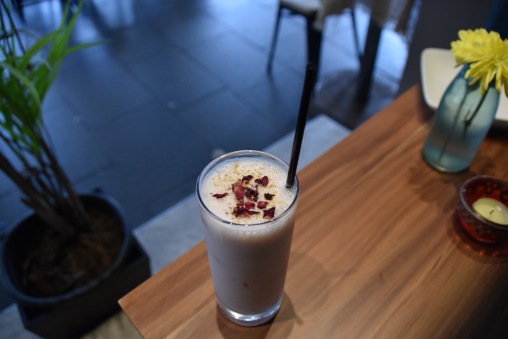 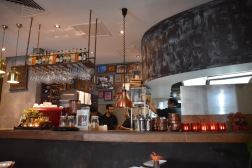 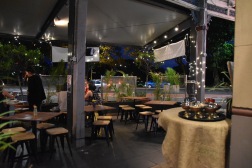 On a rainy night after work, we braved the weather and headed to Glebe, excited to try the delicious Indian cuisine at the newly opened Bombay Street Kitchen!

Entreés:
We were delighted to find that the menu includes both North and South Indian dishes, with something for everyone, whether your preference is for spicy or milder food. Despite eating a lot of Indian cuisine, there were also many dishes that we hadn’t tried before, and so we left it in the capable hands of Manasi (our host for the evening) to recommend some dishes for us to sample, and get a sense of their food philosophy.

To start off, we ordered a Rose and Cardamon Lassi, which was delicious and refreshing, and very soothing, especially when it came to some of the more spicier dishes. I loved the subtle hint of cardamon, and the rose was sweet and syrupy, just as a good lassi should be!

The first dish that we tried was the Dahi Bhel Poori, a typical street food dish comprised of a crispy semolina pocket stuffed with potatoes, sprouts, spices and tamarind chutney, with a drizzle of mint chutney and yoghurt. From the first bite itself, the taste sensations were outstanding, and it almost felt like an entire meal’s worth of flavours, with the sourness of the tamarind and sweetness of the yoghurt.

Even though this dish was an entree for us, we later found out from Manasi that in Bombay, people frequent street food vendors to have the Dahi and Pani Poori as a meal in itself. We could easily see how this could be a main meal as it was so addictive and more-ish, and we loved every bite!

We then moved on to the Kheema Kofta, which are spicy lamb meatballs served with a mint yoghurt. If you prefer more mild dishes, this one is probably not for you, but the flavours and spices were incredibly well balanced, and the cooling yoghurt definitely helped ease the kick of the chilli! We really enjoyed the portion, and the potatoes in the dish were cooked perfectly as well!

Next, we tried the Tawa Paneer Tikka, which was a dish I had been eying on the menu before coming to dine at the restaurant. I love paneer, which is a homemade cottage cheese that is commonly used in Indian cuisine, and this particular dish showcased the paneer by serving it marinated in spices and grilled. The accompaniments were a tangy mint chutney, and something that seemed completely random – beetroot yoghurt!

However, when I layered all the flavours together and took a bite, it all came together so beautifully. The beetroot yoghurt balanced the spicier kick from the chutney, coating the firm and crisp paneer in a delicious sauce, and I was so happy with the dish. Manasi and her parents try to be experimental with the menu items they create, and their years of experience in hospitality definitely shine through in the unique menu items that they serve.

Mains:
Turning to the mains, we decided on two curries from the new additions to their menu – the Parsi Macchi, and the Komdichi Saguti, and complemented this with a serving of Poriyal. The Parsi Macchi is a Parsi fish curry reminiscent of a Thai Green curry, but with a different flavour kick of green chilli, sesame, coriander and coconut. We thought it complemented the soft fish perfectly, and the curry itself was lightly spiced, but not overwhelmingly spicy, which suited my tastes very nicely.

The Komdichi Saguti is a traditional Goan chicken curry, and as the menu promised, is comprised of very bold flavours, sourced from the dry roasted chillies, black peppercorn and star anise used as the spice base of the curry. Manasi described it as a variant of the traditional Vindaloo curry, and we could definitely see the resemblance, so it was great to see how the dish had evolved into this curry.

The Poriyal was a great addition to our selection, as all the previous dishes were quite heavy and meaty, and it was nice to have some vegetables to break up the meal. The beans were very well cooked, and not soggy or limp at all. It’s also a mild option while still incorporating great flavour, which for my personal preference, is the hallmark of a great dish!

To complement these mains, we ordered two sides – the garlic naan, and the lemon rice. The naan bread was so soft and pillowy, and it was so delicious that it could even be eaten plain, without any curry! The lemon rice was a very generous serve, so this dish would be great for sharing. We had never had a dish like this before, and the dal in the rice added a twist to the dish, giving it some texture and a nutty flavour, which we loved!

Finally, although we were very nearly bursting with fullness, to finish off the meal we had a dessert to share. We picked the Lapshee, which is a cracked wheat dome caramelised with jaggery and fennel, and accompanied by a smoked yoghurt, strawberries and peanut praline. The first few bites created a bit of confusion as our palette became used to this unfamiliar taste, but after that initial taste, we really enjoyed the dessert.

While the peanut praline wasn’t for me, the mouthful of lapshee with the yoghurt and tart strawberries was an absolute delight, and it was a very light but flavoursome dessert. This would be perfect for people who prefer a less sweet and more savoury dessert, and is such a unique treat!

Ambience:
From the moment we were seated, we were able to soak up the warm hospitality of and ambience that has been created, with the modern decor and open kitchen, and traditional music playing in the background. Manasi and her team were happy to explain the menu to people who needed a bit of assistance, and the service was so attentive, with diners being seated very quickly, and food being brought out speedily as well.

A lot of thought has gone into the menu, with a $9.90 lunch special to attract students and the working crowd, and plans to introduce a breakfast dosa menu later on as well. They’ve also recently installed a movie projector to show scenes from Indian street food preparation, including the ‘cutting tea’, jalebi (a famous indian sweet) making, and many more delicious surprises!

Overall:
We really admired how passionate Manasi was about her restaurant concept and showcasing Indian cuisine, as this shines through in the menu and the dishes themselves. In an area very well known for its excellent food, being the new kid on the block isn’t easy. However, Bombay Street Kitchen is not your average Indian restaurant, as they bring so many unique dishes to the table, so grab a few friends, give them a visit, and try their Indian food with a twist for yourself!

Note: Khana dined as a guest of Bombay Street Kitchen. Thanks so much to Manasi for organising the visit!

We're always looking for more restaurants to try! For any inquiries or opportunities, please get in touch by clicking here, or email us at thekhanablog@gmail.com.